In conjunction with the ability to execute multiple TaskAttempts concurrently inside a single ContainerWorker, the support for LLAP I/O makes Hive on MR3 functionally equivalent to Hive-LLAP. Hence Hive on MR3 can serve as a substitute for Hive-LLAP in typical use cases. Despite their functional equivalence, however, Hive on MR3 and Hive-LLAP are fundamentally different in their architecture.

Advantage of Hive on MR3

The difference in the architecture leads to distinct characteristics of the two systems. Below we present the advantage that the simplicity in the design of Hive on MR3 engenders with respect to Hive-LLAP.

As it does not require ZooKeeper and Slider, Hive on MR3 is so much easier to deploy than Hive-LLAP, whether on Kubernetes or on Hadoop. For example, in a Hadoop cluster running HDP (Hortonworks Data Platform), the user should be able to install and run Hive on MR3 quickly because Metastore of HDP can be used for Hive on MR3 as well, as explained in Quick Start Guide. On Kubernetes, Hive on MR3 is just an ordinary application whose dependencies are all packaged in the Docker image.

The simplicity in the design of Hive on MR3 yields a noticeable difference in performance, especially in highly concurrent environments. For experimental results, we refer the reader to the article Performance Evaluation of SQL-on-Hadoop Systems using the TPC-DS Benchmark.

The simplicity also helps us to fix bugs that would not be easy to fix in Hive-LLAP (and Hive on Tez). For example, Hive-LLAP has a memory leak issue related to HiveConf and UDFClassLoader objects (HIVE-14430). Hive on MR3 shows no such memory leak, as evidenced by the following graph which shows the heap size and the number of loaded classes in HiveServer2 when a total of 250,000 queries invoking UDFs, each with its own Beeline connection, are submitted over a period of 60 hours. In the end, HiveServer2 keeps only 13 HiveConf objects. 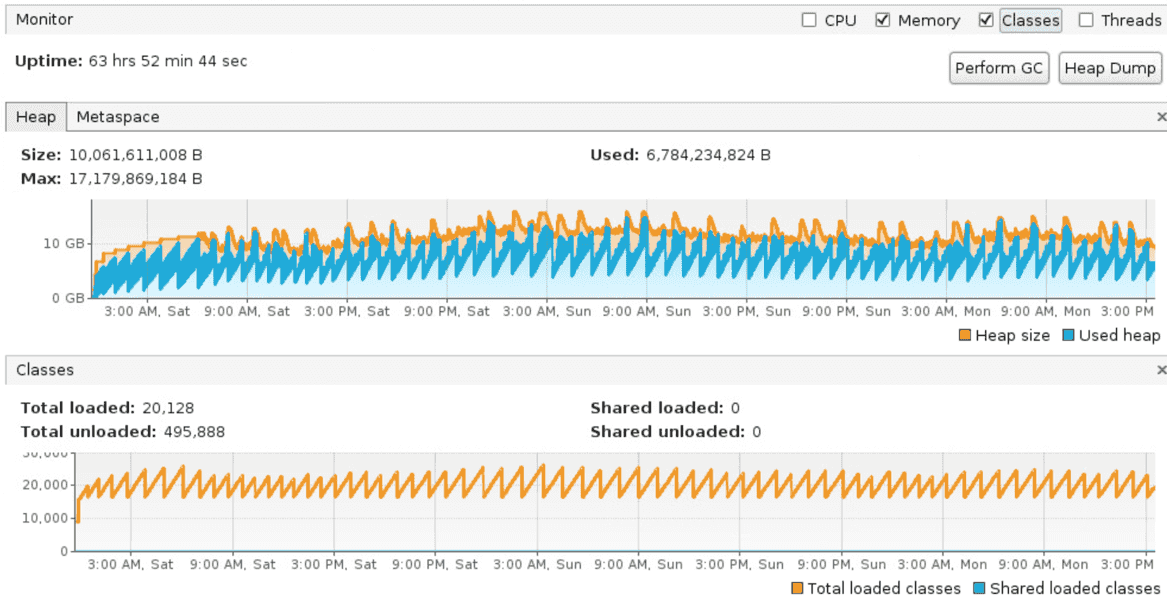 For Hive-LLAP, the administrator user should decide in advance the number of LLAP daemons and their resource usage after taking into account the plan for running the cluster. Once started, LLAP daemons do not release their resources, which comes with two undesirable consequences:

These problems are particularly relevant to Hive-LLAP because LLAP daemons usually consume very large containers, often the largest containers that Yarn can allocate. In contrast, Hive on MR3 suffers from no such problems because ContainerWorkers are allocated directly from Yarn:

In this way, Hive on MR3 cooperates with existing applications while trying to maximize its own resource usage.

This flexibility in allocating ContainerWorkers enables Hive on MR3 to run seamlessly in an environment in which LLAP daemons are impractical to run. For example, nodes with less than 24GB of memory (e.g., small instances in public clouds) are perfectly okay for running Hive on MR3. This is because from the viewpoint of MR3, running many small ContainerWorkers on a single node is no different from running each small ContainerWorker on its own dedicated node.

In Hive-LLAP, the degree of concurrency is limited by the maximum number of Tez DAGAppMasters that can be created at once by Yarn. This is because each running query requires a dedicated Tez DAGAppMaster for managing its TaskAttempts. In practice, the administrator user can impose a hard limit on the number of concurrent queries by setting the configuration key hive.server2.tez.sessions.per.default.queue in hive-site.xml to a suitable value.

In Hive on MR3, if HiveServer2 runs in shared session mode, the degree of concurrency is limited only by the amount of memory allocated to a single MR3 DAGAppMaster managing all concurrent queries. The administrator user may also set the configuration key mr3.am.max.num.concurrent.dags in mr3-site.xml to specify the maximum number of concurrent queries. Note that HiveServer2 can also run in individual session mode, in which case the degree of concurrency is limited by the maximum number of MR3 DAGAppMasters like in Hive-LLAP.