As it allows concurrent DAGs to share ContainerWorkers, MR3 employs a couple of schemes for scheduling Tasks originating from different DAGs in order to maximize the throughput (i.e., the number of queries completed per unit time) or minimize the turnaround time (i.e., the time from accepting a query to completing it). Internally scheduling Tasks in MR3 is managed by a component called TaskScheduler which basically 1) maps DAGs to Task queues and 2) schedules Tasks in a particular Task queue according to their priorities. Hence the effectiveness of TaskScheduler depends to a large extent on the way that MR3 maps DAGs to Task queues and assigns priorities to Tasks. In the actual implementation, TaskScheduler sometimes ignores Task priorities in order to maximize the cluster utilization.

If mr3.dag.queue.scheme is set to individual, TaskScheduler tries to schedule a Task from the DAG that is currently consuming the least amount of resources in terms of memory. In this way, MR3 makes its best efforts to allocate the same amount of resources to all active DAGs. Since a new DAG is instantly allocated its fair share of resources while an old DAG is not penalized for its long duration, the execution time of a DAG is predictable in concurrent environments. For example, if a DAG completes in 100 seconds with no concurrent DAGs, it has a reasonable chance of completing in around 100 * 10 = 1000 seconds with 9 concurrent DAGs of the same structure.

In concurrent environments, setting mr3.dag.queue.scheme to common usually achieves a higher throughput than setting it to individual. This is because the optimization implemented for increasing the temporal locality of intermediate data works best when MR3 is allowed to analyze the dependency between Tasks of all DAGs at once. For example, when the entire input of a Task becomes available, MR3 may decide to schedule it immediately even in the presence of many Tasks of higher priorities. If mr3.dag.queue.scheme is set to individual, however, the optimization is much less effective because MR3 can analyze only the dependency between Tasks belonging to the same DAG. In short, setting mr3.dag.queue.scheme to common enables MR3 to globally optimize the execution of all DAGs whereas setting it to individual does not.

Note that if mr3.dag.queue.scheme is set to individual, the user may ignore mr3.dag.priority.scheme because every DAG maintains its own Task queue. 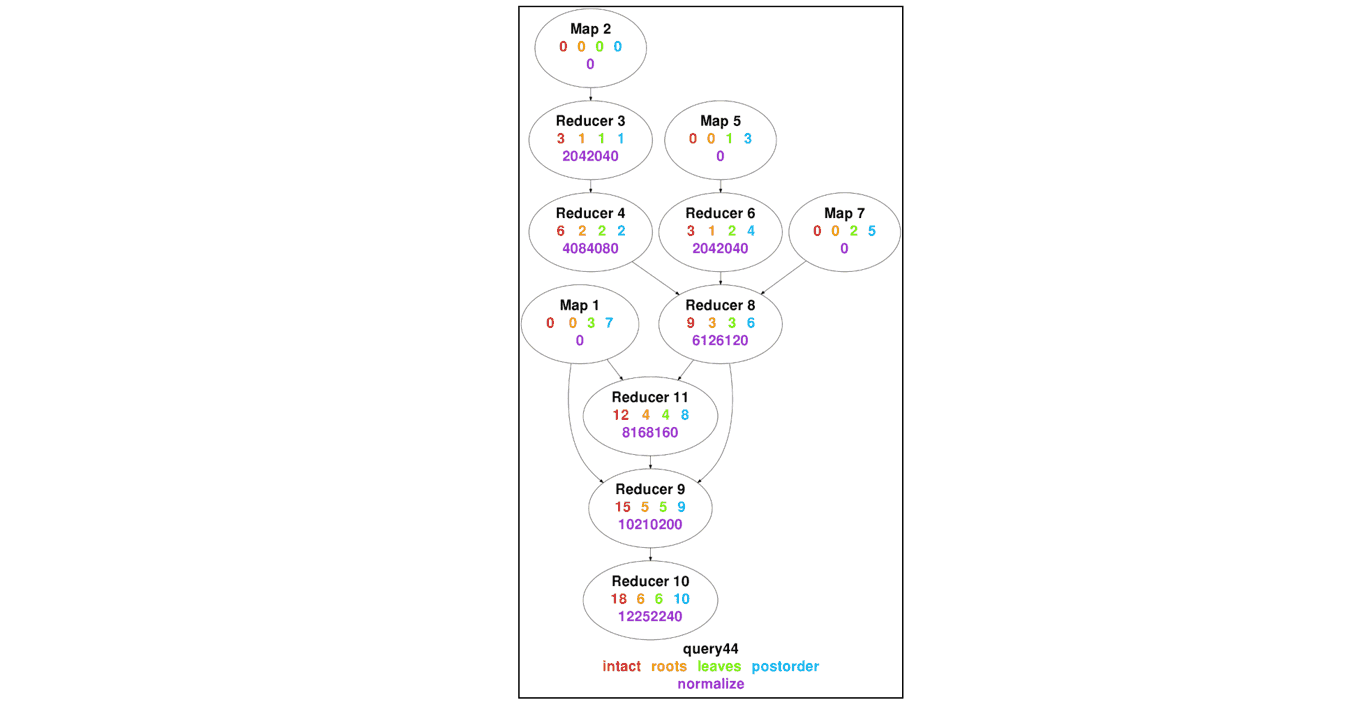 If every user should be allocated a strictly fair share of cluster resources, we recommend the configuration key mr3.dag.queue.scheme set to individual.

If the throughput or the turnaround time is the primary concern, the configuration key mr3.dag.queue.scheme should be set to common with the following recommendations.

Experiment 1: Every Beeline client submits the same set of queries.

In the first experiment, we run 16 Beeline clients each of which submits 17 queries, query 25 to query 40, from the TPC-DS benchmark. (The scale factor for the TPC-DS benchmark is 10TB.) When executed sequentially, these queries complete in 46 seconds on average while the longest-running query takes about 110 seconds. In order to better simulate a realistic environment, each Beeline client submits these 17 queries in a unique sequence.

The following graph shows the progress of every Beeline client (where the y-axis denotes the elapsed time). Each color corresponds to a unique query across all Beeline clients.

We make the following observation.

In the second experiment, we run 8 Beeline clients each of which submits a unique query from the TPC-DS benchmark a total of 10 times. (The scale factor for the TPC-DS benchmark is 10TB.) The following table shows the properties of the 8 queries. We may think of Beeline 1 and 2 as executing short-running interactive jobs, and Beeline 7 and 8 as executing long-running ETL jobs.

The following graphs shows the progress of every Beeline client.

We make the following observations.